Every few weeks I stumble across the same issue again: “How could the DNS cache be cleared again?” I admit, clearing DNS cache is not a daily task, but when it comes to it, you usually forgot the commands. That’s why the following is a short tutorial on how to empty the DNS cache in various operating systems and browsers.
Before we get to the individual solutions, I’d like to quickly explain what the DNS cache is for in the first place and when you should flush it (that’s the English term).
What is the DNS cache and when should you clear it?
The Domain Name System (DNS) is an essential service within IP-based networks, such as the Internet. If a user makes a request to a server via a program and uses a domain such as “code-bude.net”, the program first makes a request to a name server, which then determines the corresponding […] 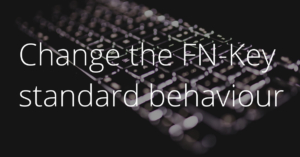 Today there is once again a short tip – this time for all owners of Logitech keyboards with a FN-key. Some time ago I was looking for a new keyboard. Criterion: Parallel usage of several devices – usually via Bluetooth. In the end the choice fell on the Logitech K375s. Stylish design, support for up to 3 devices that can be connected via Bluetooth or Logitech Unifying receiver. Only one small problem remained: the FN key.
No products found.
By pressing the FN key, the second assignment of individual keys can be activated. For example: You can control the volume by pressing the F12 key while holding down the FN key. So that’s the way I would prefer it at least. In practice, the FN key is active […] 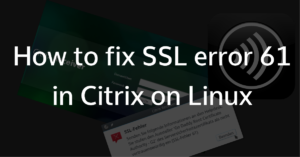 I admit, the title is quite specific and will certainly appeal to only a small readership. But anyone who is facing the problem will be, like me, grateful for a solution.
In particular, the problem is about the SSL error 61 in the Citrix (Web) receiver under Linux and how to fix it. Since I have been running almost exclusively under Kubuntu for several months, the Citrix Reiceiver also moved into the new Linux box. Unfortunately, no connection to systems could be established, since the receiver disconnected with the following error message.
SSL Error 61: You have not chosen to trust “Go Daddy Root Certificate Authority – G2”, the issuer to the server’s security certificate.

After I released the MTU Optimizer, a small tool for determining the optimal MTU, some days ago, let’s look at how to determine the optimal MTU by hand, how to read the currently set MTU and how to set new MTU value now. Of course we will discuss the whole thing for the three major operating systems: Windows, OSX and Linux.
Before we look at the implementation within the individual operating systems, we first briefly clarify what the MTU is and how its optimal value can be calculated.
Theory – Identify ideal MTU
The MTU (Maximum Transfer Unit) describes the maximum packet size of a protocol. It therefore indicates the maximum size of a data packet, so that it can be transmitted via a protocol. If a data packet is larger, it becomes fragmented – i.e. divided into several packages.
For example, let’s assume that we (=PC) would have a factory for sugar packets and our packet […]