After I released the MTU Optimizer, a small tool for determining the optimal MTU, some days ago, let’s look at how to determine the optimal MTU by hand, how to read the currently set MTU and how to set new MTU value now. Of course we will discuss the whole thing for the three major operating systems: Windows, OSX and Linux.

Before we look at the implementation within the individual operating systems, we first briefly clarify what the MTU is and how its optimal value can be calculated.

For example, let’s assume that we (=PC) would have a factory for sugar packets and our packet size (=configured MTU) would be 1.5kg. Now the bakery has ordered 5 packages (5 x 1.5 kg) of sugar, but our postman (=network interface) can only transfer packets with a maximum size of 1kg (=protocol limit). What is he doing now? He fragments our sugar packets and divides them into 1kg and 0.5kg packs. So he needs two packages for transmission of one of our initial sugar packages. In addition, the postman has more work, because he has to mark which packages belong together. These multi-packets (=overhead) slow down the sending of packets (=data transfer speed).

[aawp box=”1119154723″ template=”list”]To solve the problem and speed up the shipping, we would have to dimension our packaging size (=MTU) so that the postman does not have to repackage (=fragment). The ideal MTU is 1kg in our case. In order to determine this value, we would have to ask the postal worker for the size limit, when he starts repackaging. The same story is true for computer systems.

Now we reduce the packet size until the error message of the fragmentation is omitted. This gives us the optimal package size. However, since the MTU also includes protocol information, we still have to add 28 bytes (20 bytes = IPv4 header and 8 bytes = ICMP) to the package size value to get the optimal MTU.

To display the current MTU by console, use the following command, which must be entered into the CMD (Win + R key, “CMD”, “Ok” button):

The “MTU” column shows the MTU currently set for an interface. In addition, the “Idx” column is interesting since we need the Id from this column to set a new MTU value later.

Determine the optimal MTU in Windows

To determine the optimal MTU in Windows, we use the ping command in the console. By means of the “l” parameter, we set the packet size (this should be larger than the expected MTU for the time being) and use the “f” parameter to indicate that the package should not be fragmented.

Now we repeat the call and reduce the buffer size (in example 1550) with each call. If the ping could be executed and no longer show “packet needs to be fragmented but DF set” we are almost ready. To get the MTU size we add 28 bytes (header infos).

Set the MTU value in Windows

The placeholders {id} as well as {mtu}, must be exchanged by the corresponding values. If the command does not work, please restart the CMD by right-clicking “Run as administrator”.

To read out the current MTU in OSX, either the network setting dialog or a short terminal command can be used. If the MTU shall be read out via the settings dialog, it can be found in “System Settings -> Network -> Additional Options -> Hardware”. On the hardware tab, set the configuration to “manual” and the MTU to “custom”. The MTU can then be read out. (Important: If the MTU shall be set by the system, the hardware dialog must be closed with “Cancel”!) 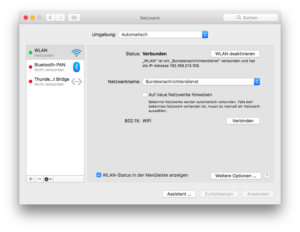 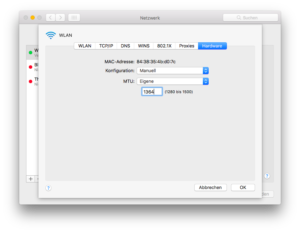 If the MTU shall be read out via the terminal, this can be done via the following shell command:

The value {iface} must be replaced by the name of the interface that is to be read out. A list of all interfaces and their names can be displayed using the ifconfig command.

Determine the optimal MTU in OSX

The determining the best MTU works (as also in Windows and Linux) by use of the ping command. For this purpose the parameters “D” and “s” must be set. The “D” parameter stands for “Do not fragment” and indicates that the package should not be fragmented. The “s” parameter specifies the size of the data packet. This initially hast to be set a little bit too large.

To set the MTU in OSX, either the hardware dialog in the network settings (see paragraph “Reading current MTU in OSX”) or a command in the terminal can be used.

The value {iface} must be replaced by the name of the interface and the value {mtu} by the MTU value. If necessary, the command must be executed via “sudo”.

To display the current MTUs for network interfaces in Linux, the following command is suitable. (This must be entered in the shell/terminal.):

As a result, you should get a list of interfaces as well as their MTU values. At the beginning of the line is the respective identity, at the end of the line the MTU value.

If the command does not work, try the following command, which creates a similar list:

Those who prefer to click through dialogs instead of writing console commands can find the MTU in most Linux distributions also on the graphical interface. In Kubuntu for example the MTU can also be read out via the connection editor, as shown in the adjacent screenshot. In other distributions, there are similar paths/dialogs.

Determine the optimal MTU in Linux

In order to determine the optimal MTU value in Linux, the ping command is suitable – as is the case with Windows and OSX. However, the individual parameters differ slightly under Linux. The “c” parameter specifies how many pings should be sent. The “M” parameter with the value “do” indicates that the packages should not be fragmented in any case and the parameter “s” parameter specifies the size of the package.

Again, you start with an obviously too large data packet and gradually reduce the value until the ping is successful. If the packet is still too large, the following (or similar) error message appears: “ping: local error: Message too long”.

If the ideal packet size is found, 28 bytes (20 bytes TCP header, 8 bytes ICMP (Ping) header) must be added to get the MTU value.

Set the MTU value in Linux

To set the MTU in Linux, either GUI dialogs or shell commands can be used. If the MTU is to be set via the graphical interface, the same dialog, which we have used two paragraphs above to read the MTU, can be used.

If the MTU is to be set via the shell, this can be done with Debian/Ubuntu systems via the network interface config file. (Other distros may require other config steps.)

to set a fixed MTU value. The value {mtu} of course has to be replaced by the desired MTU value. After the configuration file has been saved and closed, the interfaces should be restarted.