Recently, I bought a netbook for my workshop to control a laser engraver (the DK-8 from Neje). Unfortunately, I had overlooked a small detail. The display of the netbook has only a native resolution of 1,024 x 600 pixels. However, the window of the control software requires at least 800 pixels in height, so that some of the software is not visible and thus can not be operated.

But remedy could be created by a small adjustment to the operating system. (In my case Windows 7 Starter.) By changing a key in the registry, the resolution can be increased beyond the native resolution. That’s how it works…

In order to support higher resolutions than the display’s native resolution, a registry key must be adjusted. Therefore open the Registry. (Either via the search in the start menu with the term “regedit” or by Windows key + R –> “regedit”.)

Within the registry you navigate to the following key:

If the path above doesn’t exist on your system, you can use the search function (via the menu or Ctrl + F) and search for the Key Display1_DownScalingSupported. In the search dialog, you should set the option “search for the entire term”.

If you have found the key, double-click it and change the value from 0 to 1. Then you should search again if there is another key with the name “Display1_DownScanlingSupported”. If there’s another one, this should also be changed as described above. Finally, the computer has to be restarted. After the reboot any display resolutions can be set from the display resolution dialog. 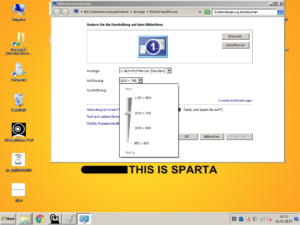 With this small tweak, even old devices with low resolution can still be useful. However, what also should be clear, is that when the resolution is increased the screen is no longer as sharp as with it’s native resolution, since it should represent more pixels than it can represent physically. For my part, however, I prefer a muddy picture over the alternative, which would mean that the netbook can not be used because the software can not be displayed.

Finally, a small request. I have made this customization on a netbook with Windows 7 Starter. Other systems I have not yet tested. If you have tested the adaptation under Windows XP, Vista, 8, 8.1 or 10, let me know by comment, whether it has worked.