Anyone who develops software and especially if he/she does so in the web environment, has certainly already written one or the other login system or at least had points of contact in this area. Besides the logic of a secure login or user management system, the secure storage of passwords is one of the most important points during implementation.

Even if the actual login code is 100 percent error-free and secure (which should never be assumed in practice), security vulnerabilities in the server software can still lead to intrusions or hacks. There is always a variable that is out of one’s control and thus websites are hacked, compromised and complete databases with usernames and passwords are read every day.

In order to protect users in the best possible way in the event of such a hack, passwords should be protected by salts (=salt; a methodology from cryptology).

In practice, however, it unfortunately looks like many developers are aware that they should salt passwords, but the opinions and approaches about the “how”, i.e. the implementation, differ greatly and are sometimes so wrong that the well-intentioned “protection” tends to have a negative effect.

Password hashing means applying a hash function to a password. A hash function is a so-called scatter function, which makes it possible to project large input sets onto (usually smaller) target sets. Often the target sets also have a fixed length.

For the Secure Hash Algorithm (SHA for short), for example, the length of the target set is always 160 bits, which in turn is often written as a 40-digit hexadecimal number.

So if you have the password “Secret” and apply SHA1 to it, the output is as follows: 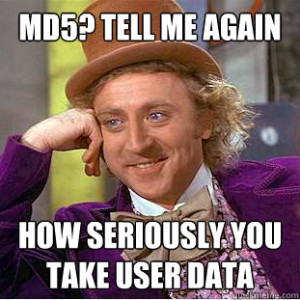 Despite the much longer input, the target set still has the same length of 40 characters. This results in a problem of hash functions. Since the input set can be larger than the target set, it can happen that two different inputs produce the same hash value. This is called a collision.

If the hash is to be stored in the database instead of the password, collisions are an undesirable side effect. In addition, not every hash function is suitable for application to passwords. For this reason, there is a subtype of hash functions called cryptological hash functions.

This type of hash function is characterized by a number of features. For example, a cryptological hash function is by definition collision-resistant. Collisions are still theoretically possible, but they involve an insurmountable amount of work, so that practically no collision can be found. Further, even the smallest changes to the input set should cause a seemingly arbitrary change to the target set. Furthermore, it shall not be possible to reconstruct the input from a hash of a cryptographic hash function.

[atkp_product id=’7146′ template=’7130′][/atkp_product]If collisions are nevertheless found for cryptological hash functions, then either a weakness has been discovered in the algorithm or the effort required to find a collision is no longer great enough in relation to the technical progress to ensure collision resistance. In this case, the respective algorithm is said to be “broken”. The use of such algorithms should be avoided. (This also applies to the MD5 function, for example.) Thus, only cryptological hash functions should be used for password hashing.

The standard procedure for managing user data and passwords using hash functions is as follows:

The error message should only ever say that the credential data is incorrect. If it is stated whether the password or user name is incorrect, the attacker can already conclude which one of the two is correct in any case. Therefore, only generic error messages should be issued at this point.

The above four steps, i.e. hashing the passwords, ensure that only the hashes are made public if the database is lost or broken into. However, the attacker cannot log in using the hashes, since they would be hashed again in step 3 and would therefore no longer match the hash of the actual password.

Why are hashes not secure per se?

After the last paragraph, one might think that (cryptographic) hashes are secure per se. One might mistakenly assume that, using the four steps from the previous paragraph, the passwords are sufficiently secure and that one has done everything necessary to protect them. Unfortunately, this is not the case! 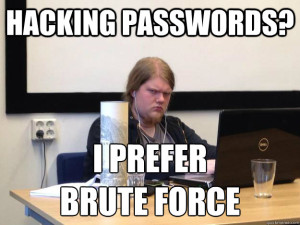 While we have correctly stated that a hacker cannot (easily) log in using the hash, there are still ways to infer the password from the hash. And since users (unfortunately) usually use the same credentials for multiple portals/websites, recovering the password is in the hacker’s interest. Therefore, we will now look at how hashes can be “decrypted” (or cracked), and then in a later paragraph we will look at how we can further mitigate this risk.

In principle, we can distinguish between two methods of cracking hashes:

Now let’s get to why we should salt passwords before hashing them.

However, if the passwords of the individual users are given a random salt, the two passwords result in different hashes, so that a lookup table cannot work, because the salts are not known before the hack and therefore no lookup table can be precalculated.

Brute force attacks are immune to this. However, for sufficiently long passwords, the effort of brute forcing is so high that decrypting all captured passwords cannot be done in an acceptable time. In addition, key stretching can make brute forcing even more difficult. (More about key stretching in the next section).

When using salts, the following things should be considered for maximum effectiveness.

So let’s summarize again in a nutshell:

If you follow the rules above, not much can go wrong. Nevertheless, in the next section we’ll take another look at what you definitely shouldn’t do when hashing and salting.

How not to hash and salt passwords

Attention – the following things should explicitly not be done when hashing and salting passwords!

Using the methods learned so far in this article – hashing, salting, and key stretching – a well-secured system can already be set up. However, there are other ways to increase the protection of passwords. One of these possibilities is to encrypt the hashes.

Encrypting hashes can ensure that brute force attacks become useless. During a hack, the hacker receives the hashes in encrypted form. If he now generates hashes in order to compare them with the captured (supposed) hashes, he will not find a match because he would still have to encrypt the hashes he generated using the same key as the application.

Solutions such as AES or HMAC are suitable for encrypting hashes. For this system to work, however, the key (secret) should be stored on a dedicated system or the entire encryption process should take place on this system. If the key/encryption logic is on the same server as the database, it is likely that the attacker will have access to it as well, so that the encryption can be broken. However, if there is no other way or no suitable hardware available, it is still better to implement the encryption logic on the same web server as the database than not to encrypt at all. Nevertheless, it should be considered whether the security requirements do not dictate that additional, dedicated hardware be purchased in such a case.

Furthermore, the key for the hash encryption should be generated dynamically during the installation of an instance. A key that is permanently stored in the software increases the risk of a successful attack. Once the attacker has access to the code, he could attack all instances of this software if the key is fixed. With a dynamically generated key, on the other hand, the attacker would have to have access to every system that he wants to attack.

The most commonly used method for comparing two hashes is probably as follows (or similar):

However, the “==” comparison operator (in most languages) causes the comparison to stop at the first different digit and to be acknowledged with a “false”. In the above example, this would be directly after the first digit. For identical hashes, however, the “==” operator would go through all digits of the hashes. This results in a time difference that attackers can exploit.

This scenario may sound improbable at first glance, but it is technically and practically feasible, as a paper from Stanford University shows.

To eliminate this attack vector, it is necessary to use a time-constant comparison routine. This could in turn look like the following:

In the above code, each digit is passed through in any case, regardless of whether the two hashes are equal or not. Thus, the attacker cannot draw any conclusions about the correctness of his hash from the time required.

Even though the article has now become somewhat more detailed, it can be stated that password hashing and salting is not “witchcraft”. If you limit yourself to the essential points, it is possible to implement a secure system without much effort. And just because it is not an unmanageable effort, one should always use the above mentioned techniques like hashing, salting and key-stretching when implementing a login/password based system.

I would appreciate feedback and experiences (as always). How do you implement your hashing system? Do you have experience with key-stretching, salting and the above mentioned approaches? Has your system or one of the systems you maintain ever been affected by a hack?