Today I want to present you one of my larger craft projects. This time it is not just about software, but also about the associated hardware. What is it? A web radio!

I like to listen to internet radio stations, but I didn’t want to run my pc only for listening to webradios.  Connecting my phone to my stereo either wasn’t a solution, since I’d rather wear this with me, because I don’t want to run for each SMS / Whatsapp message to the music system. And because I always like to tinker, it was obvious to build a web radio as a standalone device myself.

As this article has become a bit longer, there is a brief overview of the following sections of the article, so that everyone can quickly find what he looks for.

The RadioduinoWRT is a self-designed and implemented webradio I built in the last weeks. So it’s a device that enables you to play your favourite internet radio stations. To give you a brief overview of how the finished product looks like and works, I have created a short video.

If any of you want to see more, you will find some pictures of the finished radio at the end of the article.

Once the basic idea to build a web radio myself was fixed, I thought about the components to be installed. So initially I also included a Raspberry Pi to discussion. Finally, I have decided on a combination of the TP-Link WR703N router (about which I have already reported several times in my blog) and an Arduino Mega.

This decision had several reasons – first, I had both the router and the Arduino still in my parts box and on the other I wanted to implement the project as cheap as possible and on minimal hardware. Certainly a realization with a Raspberry Pi would have been possible, but this would have been more expensive than the TL-WR703N and the Arduino Mega together. Furthermore the hardware of the Raspberry is almost “oversized” for the project requirements.

3. What should be the functions of the radio?

Also in the beginning of the project I have worked out a list of functionalities that should be supported by the finished radio.

All of these requirements were implemented during the project. Other features are not initially planned. If you, however, should have any good suggestions,  I’m not averse to implement them and then add it to the article accordingly.

Once the requirements of the hardware and basic ideas were made, I have created a small sketch that defines how the later structure should look like. 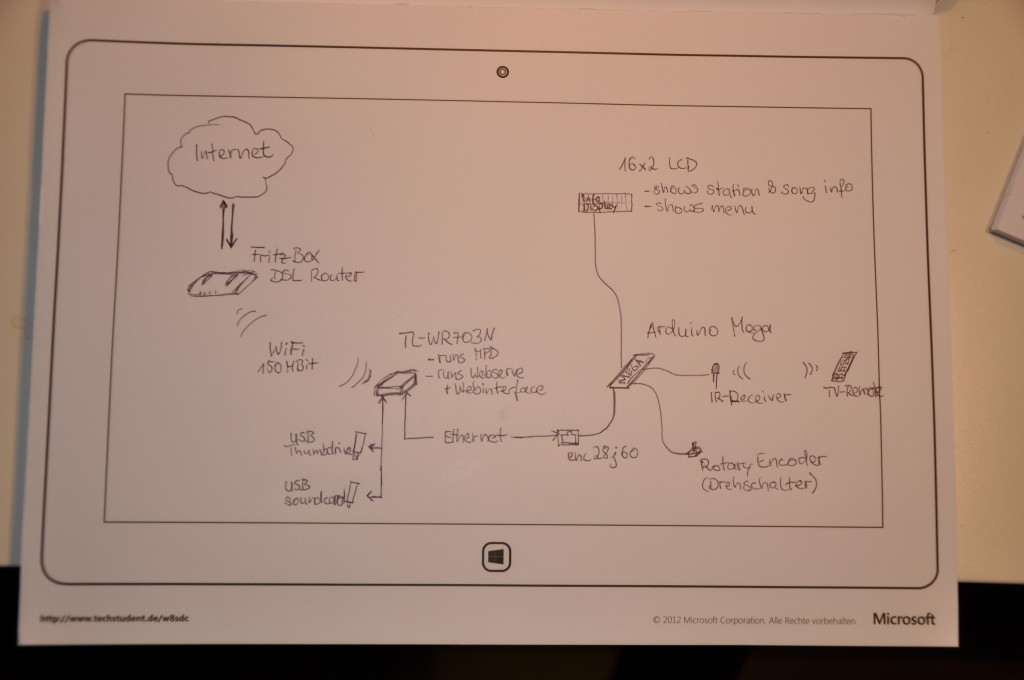 The parts, that I have finally installed, are listed below. To help you find them on the internet, I set a link to the stores where I bought them for each one. (If any of the links do not work any longer, please send me a short comment below the article.)

All together it cost about $ 99. At a first glance this looks a lot, but most of you will probably have some parts even in your own workshop or in the junk box. For example, almost everyone has floating around a USB thumbdrive eventually somewhere…

If all parts are provided, we can start with the configuration of the TL-WR703N. On this should run MPD as a music server and a also a web server. Therefore, however, the original Chinese firmware must be replaced by OpenWRT one. Then the memory of the router needs to be expanded using a USB thumbdrive, so that there will be enough space for MPD, the web server and the web interface.

I have already described in the following two articles how to get the TL-WR703N flashed with OpenWRT and to extend its memory (keyword: ExtRoot):

After you have followed all steps which are described in both articles above, let’s go on to the router setup.

5.1 Installation of the sound card

Now turn your TL-WR703N on again, login in via SSH on the router and enter the following commands (one command per line):

After entering the last command (“lsusb”) all USB devices should be listed. Here the USB sound card should also be visible. Now enter another command:

Here the sound card should now also be listed and recognized as such. Instead the card will not be found. You have to enter the following commands so that  the card is correctly recognized as a sound card in the system.

If we enter the “cat/proc/asound …”-command again, the sound card should be displayed correctly.

In the next step, we will install MPD and MPC. MPD stands for Music Player Daemon and is a software that can play both music files and music streams. MPC is a console-based control software for MPD.

In order to make everything run, three directories must be created and a few small changes to the configuration file of the MPD have to be made.

Using the last command we open the configuration file of MPD. Here we scroll to the line “# An example of ALSA output:” and uncomment the following “audio_output”-block. The whole thing should look like this:

All other “audio_output”-blocks, also the OSS block, have to be commented out, if this has not happened yet. For this purpose, write a “#” at the beginning of each line you want to comment out.

The installation and configuration of MPD/MPC should now be completed so far.  You can now plug in a pair of headphones into the USB sound card to check if everything works. After that you can enter the following commands in the console for testing.

With “mpd” you start the server and with “mpc” the client. If you’ve done everything right, then the client’s output looks like the above status bar (volume: 100% …). But we need to specify the url of a web radio and set the MPD to play it to verify whether a web radio can be played.

Now you should hear some music from “Funkhaus Europa” on your headphones. Otherwise, scroll up a bit and see if you previously might have overlooked something in this tutorial.

More commands for the MPC can be found here.

6. The part around the Arduino

The most difficult part on the implementation was to handle both the long and informative texts on the display, as well as the Ethernet port, while having just very little memory available on the Arduino. Initially there were a lot of memory overflows. Finally, however, everything runs smoothly.

Source code for the arduino

As web server I chose “Lighttpd”, since it is very resource-efficient. There follows the installation of LigHTTPD on the TP-Link router next. For this we have to log in via SSH on the TP-Link again.

After the installation we have to change a few settings.

If the config file is opened, tweak the following settings.

Now you can save the lighttpd.conf file and close it. In the next step we will create the web root directory and start LigHTTPD as a service.

Now we need to tell the web server how to handle PHP files.

After the installation, we need to specify the web root directory here yet.

Now we are done with the installation of the web server. Finally we  have a PHP enabled web server. As a minimum, we now need the PHP interface between Arduino and MPD/MPC. Therefore create a file called index.php in the “/ www_ext” folder.

Then copy the following PHP code into it.

If you want to have the web interface for the web browser in addition to the Arduino interface, you also need the “index_web_api.php”-file and the folder “webradio” including all files. The script and all associated files can be found in RadioduinoWRT GitHub repository. More in the next paragraph.

All source codes for this project can be found in my GitHub account. There is a repository named “RadioduinoWRT” which contains the source for both the Arduino and for the (web) interface.

9. Photos of the radio

As initially promised, here are a few more pictures of the radio. Should you want to see something special or some more details, drop me a comment and I will deliver the desired photo. 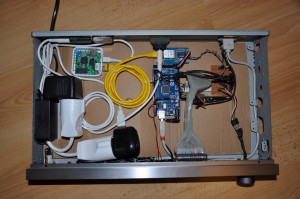 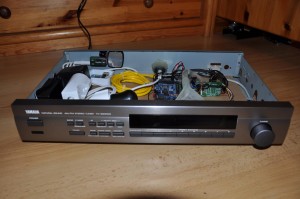 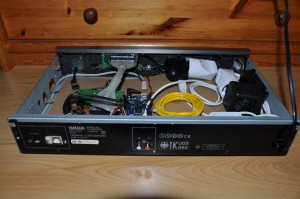 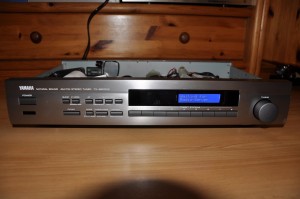 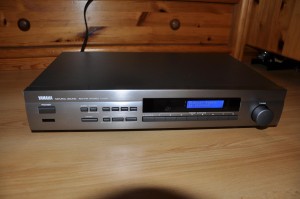 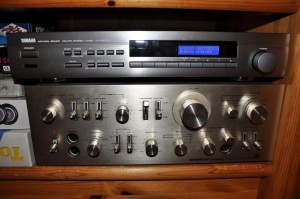 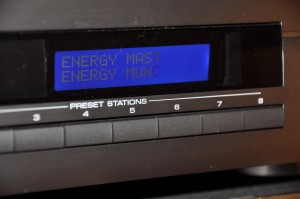 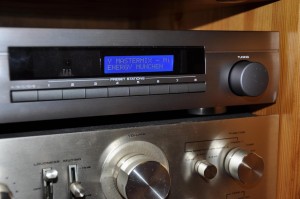 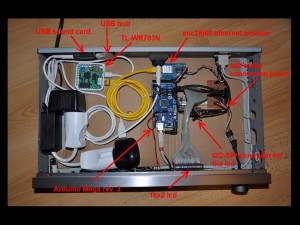 The web radio was my first real project with the Arduino. Sure, I’ve already prepared small circuits, but until now I have never built “a real product” out of it. In between I was about to give up and jack it all in, because I had really problems with the limited memory of the Arduino and its rather weak debugging options. But finally I got it to work and I’m also a little itty bit pride to have arrived.

Certainly an experienced hobbyist/(hardware-)hacker would have done it more professionally, but you may not forget that this was my first bigger project.

What I definitely take with me, is  that we should overcome our inhibitions against new technology and that such projects are doable with enough stamina, ernegy and good will.

I hope you enjoyed reading the article. If you still have questions, suggestions or tips, I would appreciate your feedback!