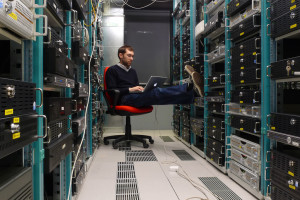 A couple of days ago, a friend of mine (and co-worker) and myself talked about the topic of homeservers, because we both were looking for viable solutions to make our files available in our home network. During our discussion, the following points were brought up repeatedly: price / performance ratio, processing power, storage, security, performance, power consumption (or operating costs) and flexibility.

Right from the beginning we discussed all solutions that weren’t called (Hardware-)NAS and rather quickly waved goodbye to the solutions that came our minds.

The Fritzbox as a NAS – And it lived happily ever after…

For example, one of the cheapest solutions that we thought of would be attaching an (or multiple) external harddrive via USB to our Router (Fritzbox) and configure the Fritzbox as a NAS. Most of the hardware would have been available already, power consumption would have been slightly higher (due to the harddrives) and the costs would have been almost nil. Furthermore, the Fritzbox comes with a built-in NAS feature through software. At least this is what it’s called by AVM…

Anyways, the idea was scrapped! Whoever had a USB harddrive connected to the Fritzbox knows, that the small processor within is simply not up to the task. During testing, I got data transfer rates of 0.5-2.5 MB/s, which was neither in mine, nor my friends / co-workers tolerance range.

The same applies to the Raspberry Pi. It has a slightly faster CPU, but USB and LAN go through the same BUS, resulting in a measly 3-5 MB/s data transfer rate during my tests. 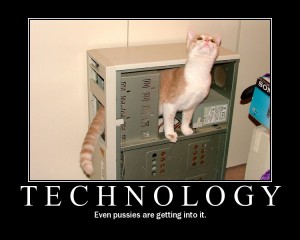 So, if the Fritzbox is too slow, we need something faster. How about an old desktop PC? Case, power supply, RAM, everything you need for a start is already there and every computer scientist / computer geek has an old „rig“ standing around somewhere. The advantages are pretty obvious. Better performance (if it’s not the trusty 486 that you dug up in your basement) and a high flexibility in terms of the OS as well as in configuration and software selection.

Disadvantage and knockout criteria? The power consumption. If you’re not rolling in cash and don’t call an Intel i3, i5 or i7 of the last generations in your old, discarded computers your own, your desktop experiment is very likely to turn into a power guzzler, because the operating cost for a 24/7 operation would be disproportionate towards the price of an alternative system.

So, a standard NAS then?

Eventually, we reached the point where we thought about simply buying a run-of-the-mill NAS. We could choose from the full range from Buffalo, to QNAP, to Synology and Western Digital. The only feature that I lined out upfront was the need for 4 slots / bays for data harddrives.

Looking at the market, you’ll find out that you’ll pay about 200 EUR for a 4-bay NAS system. And it doesn’t really matter if you decide on a device from DLink or one from Synology.

What are the pros and cons? One of the advantages would be the systems „simplicity.“ Especially Synology’s DSM (DiskStation Manager), the Linux based operating system of the Synology NAS, appealed to me. A stylish web interface, simple configuration and a whole lot of packages (extension software), that can be installed through the package manager in the web interface.

And the cons? The price considering the flexibility. Huh? Anyone who paid attention while reading will probably call me retarded now. First, i’m talking about how much I like the simplicity / straightforwardness of th DSM and then i’m suddenly screaming for flexibility? Doesn’t one exclude the other?

The homeserver as an ideal compromise 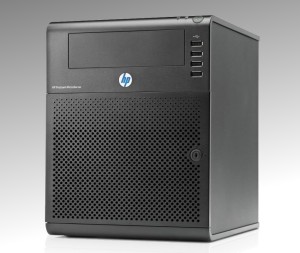 No, not necessarily, because there is another solution, which offers more flexibility than a ready-made NAS, can be run with the same software if wanted and consumes less power than a desktop pc, but isn’t more expensive than a comparable NAS. The solution is called „homeserver“.

After some research, I decided on the HP ProLiant G7 Microserver N54L (HP N54L for short). Even though it’s predecessor, the G8, is already on the market, it doesn’t offer much more except for a sleeker design and the possibility to exchange th CPU, despite costing twice as much.

The N54L is priced at about 200 EUR and comes with 4GB of RAM and an AMD Turion™ I Neo dual-core processor. It also offers 4 bays for 3.5″ harddrives, a 5.25″ bay for an optical drive, an eSATA port, Gigabit LAN, 6 USB ports and 2 PCI Express slots. You simply won’t get a comparable NAS for that amount of money.

A look at the setup

The plan is to start with the following structure, which will gradually be covered on the in other articles:

As I briefly described, i will write a couple of posts regarding the assembly and upgrade as well as the configuration of the system. These articles can be found through the category „homeserver“ for now. Maybe I’ll put an overview page for all articles later.

Before starting, I would like to know what you think of my plan. Do you understand my reasoning and my decision or would you have decided differently?

Are there things that you are most interested in? Things I should pay special attention to or that I should test for you?

The pictures are licensed under CC-license and are from: Leonardo Rizzi, SuziJane und Hewlett-Packard Development Company, L.P..