When it comes to online storage and sync, then Dropbox is my number 1 and because I’m pretty sure I’m not alone with this sight, below there is a collection of 20 tools which will help you to realize the full potential of your Dropbox. 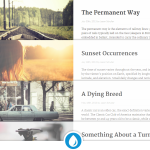 New articles can be written in the easy to learn Markdown language and published by simply save them in your Dropbox. The whole thing is quick, easy, and also looks quite chic. 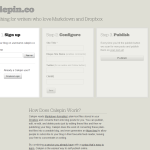 Calepin.co is the second blog system in our listing. Also Calepin supports the markup language “Markdown” and allows easy publishing of blog posts.

readwrite.com said about Calepin that it’s “the easiest blog platform in the world”. 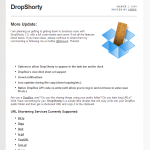 DropShorty is a so-called droplet. So a program which which does an action if you drop a file onto the programs icon.

If you pull a file on the DropShorty logo, drop Shorty loads the file into your Dropbox, then creates a sharing url and then shrinks this url by use of a link shortening service of your choice. 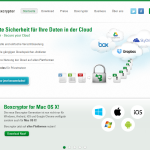 “Secure your cloud” – this is the slogan of the BoxCryptor service. BoxCryptor extends Dropbox by a virtual drive that is synchronized with your Dropbox.

The cool thing about that? – all files will be automatically encrypted before they are synced and uploaded to your Dropbox. 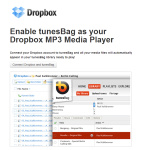 #5 – tunesBag / Media Player for your Dropbox

With tunesBag you can build your own online streaming service out of your Dropbox. Similar to Spotifiy or Google Music, tunesBag will deliver a web interface to you, which enables you to listen to music.

The difference – tunesBag uses the music which you have previously stored in your Dropbox. Supported music formats currently include mp3, m4a, wma and ogg. 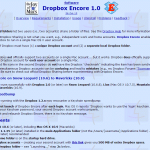 #6 – Dropbox Encore / Use two Dropbox accounts at once

Dropbox Encore is a program for Mac OS X that allows you to use two Dropbox accounts including two synced  folders simultaneously.

This makes sense for example when looking for a solution to use a private and a second account for work. 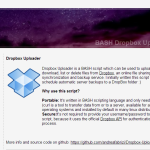 Dropbox Uploader is a small bash script, which allows yout to up- and download files from the bash (shell) into your Dropbox account.

This makes, for example, sense if you want to back up files from your web server. Another example would be a CronJob which is conceivable that a folder automatically backs away at specified intervals. 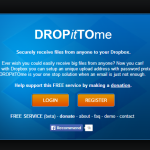 DROPitTOme allows any web user to upload files anonymous into your Dropbox. Anonymous in this case means that the uploader does not need to know your credentials, not that he or she is 100% anonymous.

After DROPitTOme is connected to the own Dropbox, DROPitTOme creates a custom upload page, where anyone who know the url can upload files into the linked Dropbox. The Dropbox owner may be informed by mail in turn about new uploads. 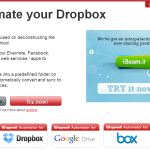 #9 – Wappwolf Automator / Automation in the box

With the Dropbox Automator from Wappwolf you get a tool which can manage a handful of helpful tasks and link services.

So it’s easy to set up, for example, that images after their upload Facebook are automatically saved in the Dropbox too or that text-documents will be automatically converted into PDF format. 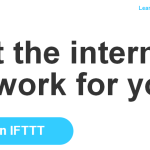 Behind the cryptic name ifttt, which stands for “if this, than that”, there is another automation solution. As the name suggests, the principle is based on action and reaction.

So you can create any number of pairs of rules, such as “If an email with an attachment comes in, then automatically save the attachment in my Dropbox”. 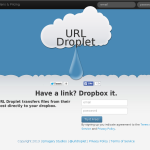 URLDroplet is a service that allows you to load arbitrary files directly into your own Dropbox, without these being previously cached on your own computer. Therefore you have to enter the URL of a desired file and then URLDroplet copies this file into your Dropbox. 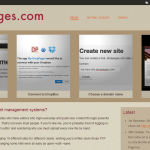 DropPages is a little like the first two tips in this listing. So DropPages also uses your Dropbox to manage and publish a websites.

The difference lies rather in the target orientation. Where link-tip 1 and 2 want to be a blogging platform, DropPages wants to be a “classic homepage CMS”. 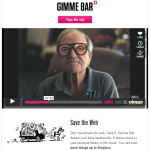 Gimme Bar is the “little different bookmarking service”. Instead of simply storing links to the content and organize them, Gimme Bar stores the whole website/content in your Dropbox.

Once synchronized with the home PC, one has his favorite web content offline available. 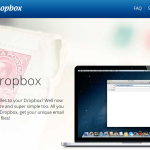 After sign-in at “Send to Dropbox” you obtain a personalized email address. Now if you send an e-mail with an attachment to this address, the attachments are automatically stored into your Dropbox by the Send to Dropbox servers.

So you can put your files from any device which supports mailing into your Dropbox in no time. 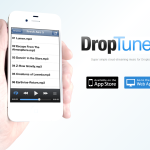 Drop Tunes is another media player which takes Dropbox as a source for the music files. By design, the player looks really similar to iTunes, and is available both as an iOS app as well as a web application. 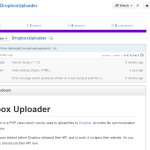 Dropbox Uploader is a PHP class that allows you to upload files to your Dropbox account by using the PHP scripting language.

So if you are looking for a opportunity to connect the Dropbox service in a Web project, you should have a look at the Dropbox Uploader class. 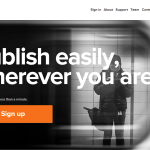 Scriptogr.am is another platform, which makes blogging possible by using your Dropbox account. Here scriptogr.am focuses not only on simplicity, but also has a minimalist layout and clear design language.

The special features include the presence of a theme for mobile devices and the possibility to connect your own (top-level) domains onto your scriptogr.am blog. 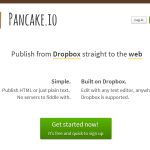 By means of pancake.io you can publish plaintext as also html documents to the web. In contrast to the already introduced blogging solutions, pancake.io doesn’t try to be a CMS and/or a complete blogging system, but much more of a simple platform to offer you an easy to handle tool to publish individual files and documents quickly. 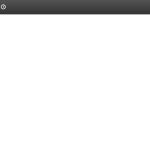 #19 – Writebox / The text editor for Dropbox

WriteBox is a text editor for Dropbox. While using the minimalist interface of WriteBox, you can open, edit and save directly documents directly from your Dropbox.

The interface focuses on the essentials – the text. Quite nice – key combinations such as Ctrl+S for saving still work, even if Writebox is a webapplication. 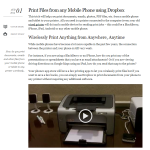 By means of the tutorial and a small script from labnol, a folder named “Print” is created inside your Dropbox folder. If you save a filel into this folder, no matter from where and from which device, the document will be printed on your local printer.