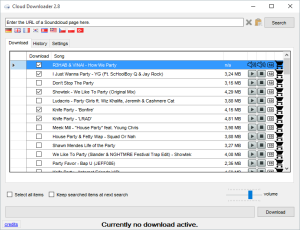 Since a couple of minutes the new version 2.8 of the CloudDownloader is available for you. At this point I would like to thank you for your numerous feedback that has been incorporated into the new version of Cloud Downloader.
In addition to a few bugfixes, the new version has mainly received your wishes and suggestions. I also added some small new features out of my head. You can see from the following list what has happened exactly.
As always, I look forward to your feedback. If you have ideas for improvements, just tell me!
Download: CloudDownloader 2.8
Innovations and bugfixes in version 2.8:

Bugfix: The “/tracks” URLs work again in the search.
Bugfix: Songs from the homepage (https://soundcloud.com/) can be found again.
Upgrade: When a song (for technical reasons) can not be downloaded, it will be skipped and displayed at the end in a list. (Previously an error […]