One of my favourite “gadgets” is the Arduino (no matter if UNO, Leonardo, Mega, …), which you will surely read some articles about in the near future. But let’s get back to the title.

Unfortunately the drivers of the Arduinos are not signed for Windows 8. So, when you try to install the drivers, you will get an error that will look similar to the following message. (Click to enlarge the picture.) 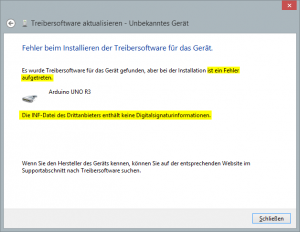 So that this doesn’t happen to us, we have to make sure that we will be able to install unsigned drivers on Windows 8. How to do so, you can read in this article I’ve written some days ago. If you have followed the steps of my article, you can start to install the Arduino driver in Windows 8 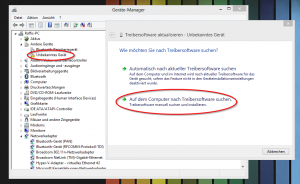 Connect the Arduino via an USB cable to the computer and open the Device Manager (Explorer-> Control Panel -> Device Manager). The Arduino should be displayed as “Unknown device”. Make a right click on it and choose the menu item “Update Driver Software”.

Then select the option “Browse my computer for driver software”, because the automatically (internet-based) driver search won’t match due to lack of a signed driver.

Now select the folder where the Arduino driver is located on your hard disk. Usually you will find the driver in a subfolder called “drivers” in the Arduino installation-folder. If you have not loaded the Arduino development environment yet, you can download it from here. Sooner or later you will need the IDE anyway. 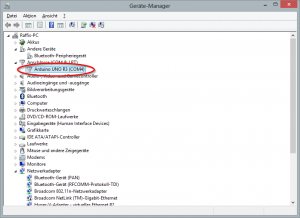 And now I wish you lots of fun playing with your Arduino. Should you have implemented your own projects already, I would be glad to read something about it in the comments. You can also post a link to your homepage, if you have written something about your project.