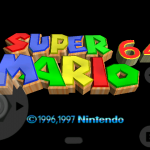 Are you one of those people who used to (or still do) spend hours, sitting in front of a game console? I for one was never the hardcore gamer and have only owned one console, but I loved my N64.

When I moved, I found some of my old N64 games and felt the need to once again play Super Mario World. Unfortunately it stayed with the discovery of the games. My N64 itself is gone without a trace.

Then last week I stumbled “accidentally” on a N64 emulator for Android. It’s called n64oid and is apparently a bit longer on the market. But to me it passed so far.
Anyway, I got spend the $4.99 and have thrown me n64oid on my Samsung Galaxy S2. And what can I say? I’m excited!

Although it runs not all of the roms I tested perfectly (which I had, however, with regard to previous experience with various emulators already expected), it works in the most cases like a charm. Games like Mario Kart 64 and Super Mario 64 running properly. Lists of compatible games can be found for example here, here and here, and otherwise is the principle – the pudding is in the eating!

Where you get roms for the emulator, I will not describe in detail here. However there is one or the other useful app such as Rom Buddy or RomGet. Otherwise, such a Google search will help continue quite well.

If you now have roms and the emulator, you can start. Immediately after the opening of n64oid this looks a bit spartan, but what’s on second glance is totally ok and sufficient.

Now navigate to the folder where your roms are saved (in my case: /mnt/sdcard/roms/n64) and click on any rom to get started.
(Click on the image at the left to enlarge it.)

If everything did work out, then you should already be in the game. If you, as soon as you have opened a game, press the menu button of your smartphone/tablet, the n64oid menu will come up. There you can save at any time or load one of the save files, configure the emulator, stop or restart, or activate the fast forward mode of the game. 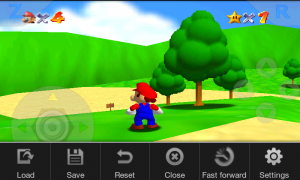 The fast-forward mode for example is very useful to skip the sometimes really miserably long/slow intros of some games, or if you have to cross long distances in role plays, etc.. 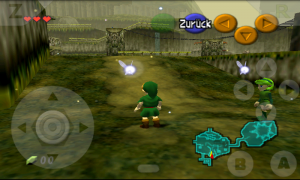 Let us now come to a question that certainly one or the other of you will make. Namely the legal issue. At this point I would like to refer to Wikipedia. Briefly it depends on the country your living. In some countrys it’s allowed to use roms of games in other not. So simply look at the Wikipedia article for your region.

I can only speak for myself and tell you so much, that I only have such games as rom, which I bought also as an original game. (Yeah, this thick gray “cartridges” that we used to put into the N64.) 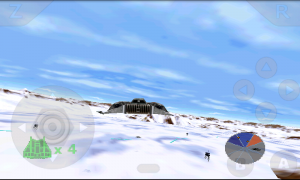 Finally, I can say that I’ve discovered two other N64 emulators just during the research for this article. On the one hand N64 Arcade and on the other Mupen64Plus. Mupen64Plus probably based on the same source code base as n64oid. More, however, I do not know. I have not been tested both.

Do you also have experience with n64oid or perhaps even with Mupen64Plus or N64 arcade? If so, then just tell me and put it in the comments!