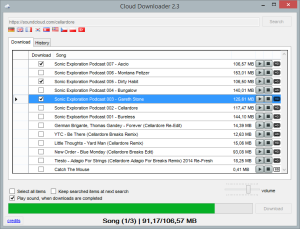 In September I brought out the last cloud downloader update. Now today I’ll release the next version for you. With the last update there have been some changes to the download logic in order to respond to the changes on the SoundCloud website. Unfortunately, my algorithm was not 100% bullet-proof, so in playlists only the first 10 songs have been displayed.
In addition to that SoundCloud began to stream some songs exclusively as rtmp stream, so I had to rework the download logic another time. I look forward to your feedback and hope you enjoy the new downloader.
Changelog (Version 2.3):

Bugfix: Possible to search playlists of any size (the 10-song-limit was removed)
Bugfix: Fixed 404-errors while downloading (by adding RTMP support)
Feature: The actual status of a searchquery is shown (this helps you while searching big playlists)
Refactored: Reworked the download logic and routines for wider support
Refactored: Wrote the threading parts again for better overall performance