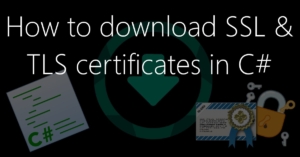 This article is about how to download (or save) SSL/TLS certificates from any server by use of C#. Although nowadays certificates can be stored quite simply from the web browser, this is always associated with quite a few clicks. And at the latest when you want to store certificates from mail servers, etc., i.e. systems that can not be addressed directly in the web browser, a programmatic solution, as shown in this post, may be the easier way.

The first addressed solution works only for HTTPS connections and is based on the HttpWebRequest class, which is also part of the well known WebClient class. If you create an HttpWebRequest, you can get an HttpWebResponse object from it.

Get SSL/TLS certificates from TCP connections

Then we create an SslStream from the TcpClient stream and access the SSL/TLS certificate via its RemoteCertificate property. As I said, this variant is not quite as nice as the first, but it offers the possibility to access certificates for almost all types of servers.