Today it is once again time for another round of “Best of Web”. This week I have a few more links on the hand, I would like to share with you. Overall, it comes back this week to some technical topics – good for geeks and nerds among you, rather poor for lovers of more “lighter fare”. Among others, today is about compilers, the history of Windows, some web design basics and a bit of image recognition in C#. I hope there is one or the other interesting article for everyone.

As always – who has more link tips, is hereby invited to send me these for one of the rounds of my “Best of Web” series. And now have fun with my recommendations of the week.

On TechPro Tristan McNab explains in a detailed article the basic principles of compiler construction. As part of his article, the basic fundamentals are explained first and then a small compiler is written step by step. That one can not deal with the entire issue about compiler construction in a single article that should be clear. However in my opinion the article is written in an interesting way and therefore worth reading.

An overview of 30 years of Windows 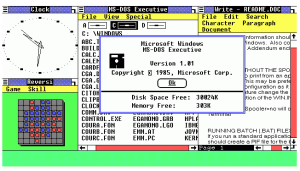 Over 30 years ago, in November 1983, Bill Gates announced Windows 1.0. Since then, several versions have been released and lots of blue screens passed. On winsource.com Joe Fedewa wrote an overview of all previously released Windows (desktop-)versions with always a screenshot of the respective version and a few additional facts. Easy to digest, nice to see what has changed over the years and therefore also in the Best of the Web roundup for this week.

What technology is behind StackOverflow?

Anyone ever had to do with software and hardware stuff should have heard about Stack Overflow. A lot of questions are asked, answers written and discussions held on the portal and its several divisions pages in every second. Nick Craver, hired as software developer at StackOverflow, wrote an article on his personal blog where he gives an insight on the hardware, which is needed to run such a mammoth project like StackOverflow.

Probably every developer has ever seen measurements in CSS stylesheets, such as px, pt and em. Has written probably. But how many of all the developers actually know when it’s the right time and the right context to use them? Ok, you will get to the goal always, no matter which measurement you use. But there’s still a difference between getting to goal “somehow” or on the “right way”. When to use which unit of measurement, you can read on the design division of tutsplus.com as well as on Dudley Storey’s blog. Both articles are really insightful and a recommendation on my part, if you have to do even remotely with CSS.

With this link tip we go again into the corner of .NET-developers. In the following article on codeproject.com it is explained how to recognize playing cards by means of a webcam and the Aforge library. To what extent that has a practical use, was once an open question. Much more interesting is the technique and methodology behind it, which certainly can be transferred to some other application areas.

Surfing through the Internet with a Mac Plus

To conclude, there’s another video like every week. In the following clip Jeff, who has once again dusted off his 27-year-old Mac Plus, shows how hes has taken his Mac to the Internet of today. The load times are overwhelming and anyone who thinks their smartphone or PC was too slow, should lead this video to his/her heart first.