At the moment I have to do a lot off PowerPoint stuff, so there may come the one or other article concerning Microsofts PowerPoint in the next days. I will not go directly to the basics, but rather the one or other little trick that was (hopefully) not known by some of you . Today I like to show you how to integrate YouTube videos in PowerPoint presentations.

Anyone who don’t like to read the illustrated instructions, may also scroll down and see the whole thing as video.

The integration of YouTube videos is only supported in PowerPoint 2010 and newer. (A workaround for PowerPoint 2007 can be found here.)

Search for a YouTube video and click on “Share”. (Do not worry, it will not immediately shared anything to anywhere.) Now click on the “Embed” button, select the small box titled “Use old embed code” and copy the HTML code from the box above it. 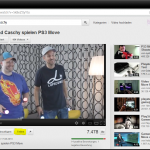 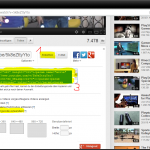 Open a PowerPoint presentation and click on “Insert” on the ribbonbar at the top. There you click on “Video”. (On the small arrow on the video button. Not even on the big button!) In the window that opens, enter the html code you copied from the YouTube page and then click on “Paste”. 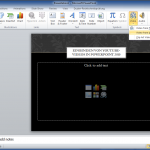 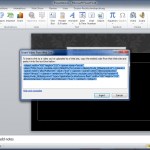 That’s it. If you want, you can still resize the video player now. The video is also shown only in the presentation view. In the edit view, you only see a black square. 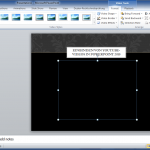 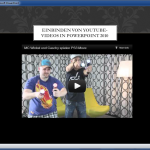 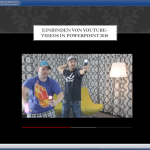 By the way – the two guys from the video are Caschy from www.stadt-bremerhaven.de und MC Winkel from www.whudat.de.

And now I hope you enjoy tinkering in PowerPoint!